Book Details How to Order Extracts 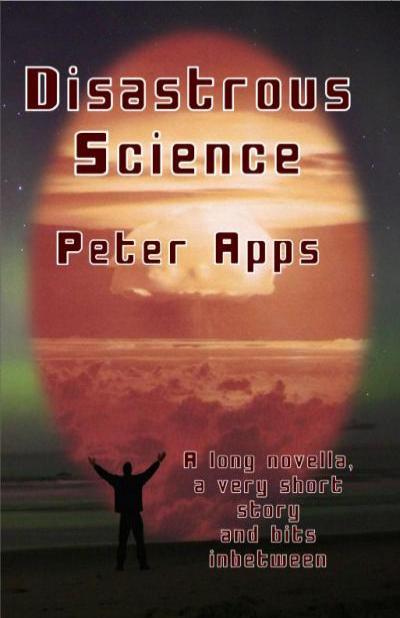 As the title suggests the stories in this compilation deals with events when science hits back. Disasters through complacency, nuclear war through losing control of events, or just an experiment going wrong all give science or rather nature a chance to show just how far we have to go.

'Fracture Point' deals with the consequences of our dependence on electricity in general and automated systems in particular. It dominates the book at 50,000 words especially since 'Leave 'Em Laughing' allows you to put the book down with a smile on your face at just 215 words.

'The Rising Moon Disaster', 'Time Done' and 'Gods and Demons' are more conventional short stories. Rising Moon is a space ship on its maiden flight to the moon, while in 'Time Done' a careless time traveller risks unravelling his future world. Gods and Demons deals with the consequences as events impinge on a society scarcely able to comprehend the outside world.

The cause of a war is dealt with in, what else, 'World War III' but it is another ultra short story though I did cheat. As you read it, imagine that you are hearing it on the radio.

The styles vary, I hope the tales interest so enjoy a mixed bag of tales about where science can lead us.

The thunderstorm made it impossible to sleep. The deafening claps penetrated the thick walls of Swaleside prison and the flashes of lightning lit up the cell as if it was day. Sam turned on his radio to drown out the noise but the tiny speaker could barely make its tinny voice heard.

As always when he was alone and idle, his mind churned over the events that led to him to facing trial and two life sentences aged just nineteen. He had been framed. It was as simple as that. He had taken the five hundred to dump and torch the car for Spencer but had been stopped by the police who then searched his house, finding a set of earrings from the botched robbery.

Sam knew that Spencer was vicious but had no idea that he was capable of murdering two pensioners for their money. Neither did it occur to Sam that Spencer would throw suspicion onto a mate who the police were after for burglaries and car thefts. A string of convictions since he was twelve did not help him either. The only thing in his favour was that he was not vicious, walking away from a fight if he could. He was never armed and never resisted arrest. Even now his thoughts and prayers focussed on proving his innocence and stopping Spencer from killing again rather than on revenge.

The right sort of prayers can be answered, sometimes in the most unexpected manner. The flash of lightning and crash of thunder were almost simultaneous. The light went out leaving the cell illuminated by a mysterious blue light dancing around anything metallic. It got darker as tendrils of light converged on the aerial of Sam's radio as if filling it.

Suddenly the interference vanished and Sam heard very clearly, “This is the BBC Light programme and It's That Man Again.”

Even more suddenly it became dark. It was not just a light turned off but a pitch black dark that reduced Sam's world to an empty nothingness. Briefly he had a sense of falling before landing on soft grass and light returning from a night sky teeming with stars. The shock and confusion proved too much and he passed out.